There’s this hilarious scene in Love Actually (my favorite Christmas movie of all time!) where one of the characters goes to America and impresses women with his British accent. They’re in a bar, asking him to say different words and cooing after each one sounds different. They ask him to say bottle, then giggle and say BOHT-el. Then, they ask him how he says “table” and it comes out sounding exactly the same. “Same,” the girls sigh, “it’s the same.” It’s a cute scene, not only because I like accents, but because Mike and I have been going around saying “same” for the last little while.

See, we’re in Montreal, where everything is somewhat the same and somewhat different. They speak French here, a lot, and it’s been a blast seeing familiar stores with French names. All the Starbucks are now Cafe Starbucks and The Hudson’s Bay Company is La Baie D’Hudson. But, there are still a lot of stores that haven’t changed their name and whenever we see one, we laugh and say to each other, “same…it’s the same.”

Montreal has been a blast so far. We’ve checked out some quirky shops, had late night diner food, fresh Montreal-style bagels, and eaten gnocchi in the street. I’m looking forward to eating some poutine, especially the galvaude variety, which is crispy fries topped with chicken, green peas, cheese curds, and gravy. I’m also looking forward to a pasta place that extrudes it’s own fresh pasta. 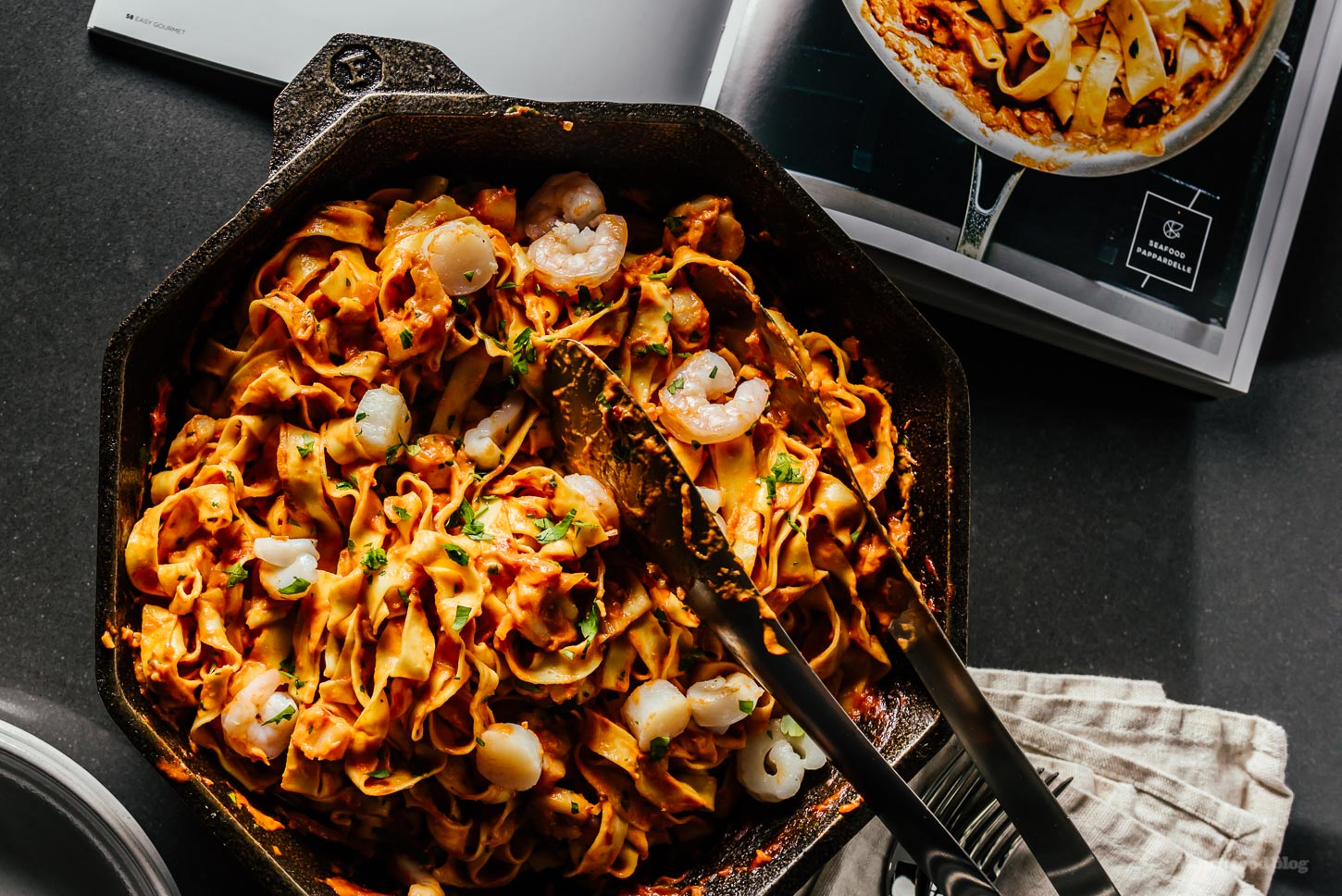 I’m a sucker for pasta, always, either at home, or out. I love how quickly pasta dishes come together and how they can be dressed up or down, according to the occasion. This pasta is a riff off of a dish that Mike and I fell in love with in, many years ago. It was our goto order at our neighborhood diner and one day, I asked the waiter just how they made the sauce. He was really nice, but I think he was holding back a laugh when he told me it was just cream and tomato sauce. I figured it was a bit more than that, did some experimenting at home and came up with this.

It’s creamy and tomato-y, with a hint of heat. The scallops, shrimp, and squid add a touch of fancy but the truth is, this dish could possibly be the easiest seafood pasta you’ll ever make. I used a quick homemade tomato sauce as the base, but if you’re in a pinch, you can use store-bought. Or maybe you have some homemade sauce just hanging out, waiting to be used? Either way, I hope you give this dish a try, either to impress yourself, or maybe a loved one 🙂

In a large skillet, heat up the oil and butter over medium to medium-high heat. Sear the scallops, shrimp, and squid, about 1 minute per side. Remove from the pan and set aside. Turn the heat to medium and add the garlic and pepper flakes. Cook until soft, but not brown. Add the tomato sauce and cream and season to taste. Return the scallops and shrimp to the pan and simmer gently on low while the pasta is cooking.

Cook the pasta according to the package. Drain and toss with the sauce and seafood. Enjoy immediately with a sprinkling of flat-leaf parsley.